As People's Republic of China is this year's host economy of the Asia-Pacific Economic Cooperation (APEC) forum, the 36th APEC Human Resource Development Working Group (HRDWG) and 15th Capacity Building Network (CBN) meetings were held in Ningbo in February 2014. IIST participated as the representative organization of Japan in the CBN. As well as holding discussions with the participating economies on priority matters in the field of human resource development, IIST announced plans for the implementation of a new project relating to human resource management for the promotion of foreign investment.

Under the theme of "Shaping the Future through Asia-Pacific Partnership," APEC has declared that in 2014 it will aim to further promote the economic development surrounding newly emerging economies centered on "advancing regional economic integration," "promoting innovative development, economic reform, and growth," and "strengthening comprehensive connectivity and infrastructure development." In response, discussions in the 36th HRDWG Meeting focused on how to contribute to the 2014 guidelines in the field of human resource development on the basis of results so far.

In the 35th HRD-WG Meeting held in Medan, Indonesia, in 2013, it was decided that the 6th Human Resources Development Ministerial Meeting (HRDMM) would be held in Viet Nam. In this year's HRDWG meeting, Viet Nam gave a report on the progress of preparations, announcing that the HRD Official Meeting and the Ministerial Meeting will be held in Da Nang on September 5 and 6, respectively. The content of the HRDMM's main theme of "Strengthening people-to-people connectivity and quality employment through HRD" and subthemes relating to human resource development, labour mobility, and comprehensive and sustained growth were studied, and it was announced that discussions would continue. In addition, it was agreed that the HRDWG as a whole would support Viet Nam, with proposals to draft a ministerial joint statement, action plan, and other documents in related economies and networks and to hold a preliminary meeting prior to the HRDMM. Furthermore, there were discussions on issues relating to the future activities of the HRDWG, including an explanation of independent assessment to examine the role and functions of the HRDWG in 2014, a medium- and long-term plan for the HRDWG, terms of reference, and continued deliberation of a tasking statement from APEC.

Twelve economies participated in the 15th CBN Meeting (Australia, Brunei Darussalam, People's Republic of China, Indonesia, Japan, Republic of Korea, Papua New Guinea, Peru, the Philippines, Chinese Taipei, Thailand, and Viet Nam). Chinese Taipei served as the coordinator for the second term. In the meeting, the participating economies announced planned projects in line with the priority issues of "strengthening HRM and HRD capacity building for SMEs and entrepreneurs," "developing competencies standardization and training quality system," "promoting skill development and networking training provider in APEC," and "narrowing the talent gaps by industry-VET-academia cooperation." As part of these efforts, IIST gave an outline of a new project scheduled to be implemented in 2014 called "Strategic Human Resource Management for Successful Foreign Investment in APEC." Many economies expressed their support of this project and their intention to become co-sponsors. In addition, discussions covered the holding of a high-level meeting on human capacity building in 2015 by the Philippines in cooperation with Papua New Guinea and the CBN's active involvement in preparations for the HRDMM. It is hoped that the CBN will further contribute to the HRDWG in the future. 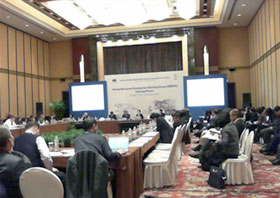 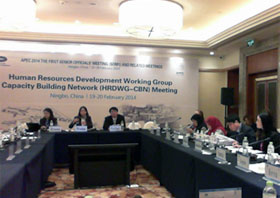