IIST organized an industrial tour for diplomats stationed in Japan with the aim of enhancing understanding on actual state of reconstruction in the Tohoku region following the Great East Japan Earthquake in March 2011.

Through the presentation by Director-General Naoyoshi Yamada of the Tohoku Bureau of Economy, Trade and Industry, the courtesy visit to Miyagi Prefecture Vice-Governor Masahiro Wako, the lecture by President Kyuichiro Sato of the Matsushima Tourist Association, and other activities, the participants had opportunities to deepen understanding on actual state of reconstruction in the wake of the Great East Japan Earthquake, plans to regenerate the industrial infrastructure, and various related matters. In the company visits, the participants not only observed corporate activities but also learned how companies took initiativesin providing necessities for victims in the stricken areas. In Matsushima and at Chusonji temple in Hiraizumi, the delegation observed that the conditions for welcoming tourists has already been established following the disaster. Some participants commented that although there were many domestic tourists, maybe because of damaging rumor, there seemed to be few visitors from overseas, prompting the necessity to promote an international awareness. 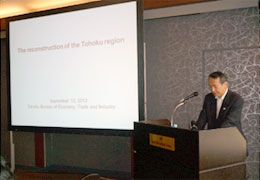 Presentation by the director-general of the Tohoku Bureau of Economy, Trade and Industry 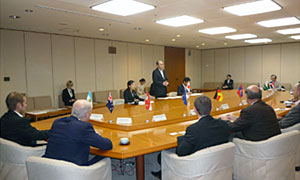