As shown below, IIST implemented new training and short-term training, inviting a total of 12 medical experts from 5 countries to visit Japan (5 from Indonesia, 4 from Vietnam, and 1 each from Mongolia, Mongolia, and the Mongolia), and also dispatched research missions to Mongolia and Indonesia and follow-up missions to Indonesia.
In addition, since this fiscal year marked the 30th anniversary of the beginning of this project, IIST invited a total of six former trainees representing countries that have participated in the project (two persons each from Indonesia, Malaysia, and Thailand) to Japan and held a 30th anniversary exchange meeting, thereby endeavoring to publicize the project activities and develop a cooperative setup for the future.

Dispatch
Research mission
From August 26 to 29, 2012, IIST dispatched a total of four persons (two doctors from Toranomon Hospital and two staff members from the Japanese Council for Medical Training ) to Ulaanbaator in Mongolia. The mission visited the National Cancer Center and State Central Hospital No. 1 and gathered information relating to the invitation of trainees from Mongolia.

From December 5 to 9, 2012, IIST dispatched two persons (a doctor from Toranomon Hospital and a staff member from the Japanese Council for Medical Training ) to Jakarta in Indonesia, where they discussed rehabilitation therapy and simulation education for medical personnel, collected information, and gave talks at the Indonesian Medical Council and Persahabatan Hospital of the University of Indonesia Faculty of Medicine.


Follow-up missions
From November 25 to December 2, 2012, IIST dispatched a doctor from Toranomon Hospital to Cipto Mangunkusumo Hospital attached to the University of Indonesia Faculty of Medicine in Jakarta to give lectures, practical guidance, and diagnostic guidance on neuroendovascular therapy to doctors of that hospital's neurosurgery department, including former trainees.

From November 28 to December 3, 2012, IIST dispatched a doctor from Toranomon Hospital to Jakarta to give practical demonstrations of dermatological surgery, diagnostic guidance, and lectures to local dermatologists, including former trainees, in the dermatology department of the National Cancer Center. 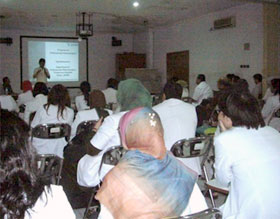 Lecture at Cipto Mangunkusumo Hospital attached to the University of Indonesia 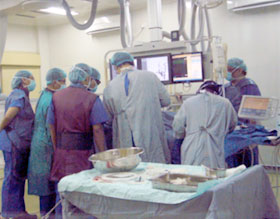 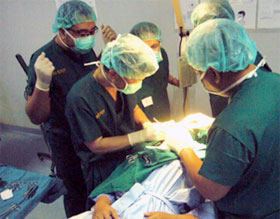