The 33rd HRDWG Meeting and 12th CBN Meeting in 2011 marked a start of a new era for APEC HRD in the sense that Japan served as CBN Coordinator and Korea assumed the role of the new Lead Shepherd of the HRDWG. In the CBN meeting, among other topics, the participants discussed the role of the CBN in APEC and project themes that should be promoted with the aim of revitalizing the CBN. IIST participated in the CBN as the representative organization of Japan and also supported the Ministry of Economy, Trade and Industry in its role as coordinator.

The APEC Leaders' meeting and Ministerial meeting held in Japan in 2010 proposed activities toward the realization of inclusive growth and sustainable growth in the APEC region. In addition, at an HRD Ministerial Meeting held in China in September 2010, such issues as job-creating growth and measures to assist the vulnerable members of society, the importance of entrepreneurship training were also highlighted. Furthermore, as the host of the 2011 APEC summit, the United States has raised "green growth" as a central issue.

Against this background, with a new Lead Shepherd (Korea) and three new network coordinators, the HRDWG Meeting witnessed a changing of the guard and fresh approach toward a new era for APEC. In the previous year the merger of the CBN with another network had been considered, but in the end Japan took over as coordinator, and the meeting became an important gathering for deciding future policy.

At the preliminary meeting on March 6, the new leaders confirmed the roles and direction of HRDWG in the future and agreed to consider ways of aligning the project funding and evaluation criteria of the APEC Secretariat and the projects proposed by HRDWG.

On March 7, through discussions between the HRDWG and other forum representatives, the delegates explored the possibilities of the HRDWG contributing to APEC as a whole. In addition, the new Lead Shepherd declared that in the future the HRDWG would aim to become an organization that promotes cooperation with other APEC fora and to provide cross-sectional HRD know-how. The new Lead Shepherd also made an appeal for HRD at other meetings convened simultaneously. From the United States, the host, the secretary of education and secretary of labor delivered speeches in which they emphasized such issues as ensuring jobs and improving the quality of education, which are common problems in the APEC region.

The CBN Meeting, held on March 8 and 9, was attended by 12 member economies (Brunei, Chile, China, Japan, Korea, Mexico, New Zealand, Peru, Chinese Taipei, Thailand, USA, and Viet Nam) and also by a representative of the APEC Business Advisory Council (ABAC). The participants reaffirmed the future mission of the CBN and, looking back at projects so far, discussed future activity themes. In particular, they discussed the issues of distinguishing the CBN from the other networks (the Education Network and Labor and Social Protection Network) by highlighting the training of managers and administrative officials who will steer the economy; focusing the main purpose on new HRD needs; promoting projects on themes in line with the APEC Agenda; and promoting active collaboration with other fora and active participation by the private sector and academic societies. Japan presented a completion report on the "IPR (Intellectual Property Rights) Strategies for Emerging Enterprises" and distributed a casebook as one of the project outputs. In addition, Japan presented an interim report on the "Strategic Approach to Sustainable Capacity Building" project and introduced the direction of CBN and new project concepts proposed by this project, which gained approval from participants. Details will be further threshed out in the future.

On March 10, the final day, the Lead Shepherd reported on the results of his presentations relating to the HRDWG's role and cooperation made at various other APEC meetings held in parallel with the HRDWG Meeting. The participants also agreed to continue calling for the coordination of project endorsement criteria. It was decided that the next HRDWG Meeting would be hosted by Russia in February 2012.

The HRDWG, which was launched in 1990, has entered a new era. Following a changeover of all of the HRDWG's top officials, including the Lead Shepherd, this meeting was a chance for them to establish liaison and mutual understanding. In this sense, one major result was the fact that the Japanese CBN coordinator was able to win the trust of related parties. Nevertheless, the number of economies participating in the CBN was small at 12, so in the future it would be necessary to call on other members to participate as well. Furthermore, the CBN would continue to consider new project proposals for the current year. 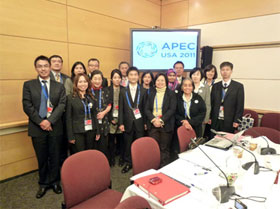 APEC representatives who participated in the CBN Meeting 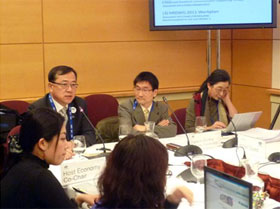 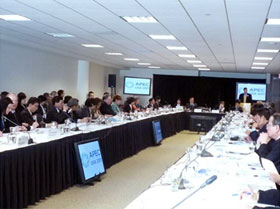 Plenary session of the HRDWG Meeting