Through regular meetings of the Kyushu-China Industrial Technology Conference and the Yellow Sea Rim Economic and Technological Conference, Kyushu has been making efforts to deepen and expand economic exchanges with China. In addition, in order to support environmental industries in the region, Kyushu has been actively promoting their overseas business development in collaboration with related organizations. In particular, it has been implementing cooperative projects with Dalian, including the dispatch of missions from the Kyushu Recycle and Environmental Industry Plaza (K-RIP).
Kyushu has a great deal of experience in overcoming the industrial pollution that occurred as a consequence of its development of modern industry and an accumulation of environmental industries (technologies) that were fostered in the process. China today, on the other hand, faces the same environmental problems, and places much hope in aquiring this knowledge and experience.
Furthermore, small and medium-sized companies in Kyushu see a good opportunity to develop the exchange and cooperation that has taken place so far in the business-based economic exchanges.
However, since environmental industries have to engage in specific business development on the basis of legislation and systems, they are an industrial sector that has especially deep connections with the government administration, so the active involvement of China‚Äôs administrative bodies is essential.
Therefore, this seminar was held in Dalian to study ways of promoting economic exchanges between Kyushu and China in the environmental field. Participants included more than 70 public- and private-sector representatives from Japan and high-level officials from the Ministry of Environmental Protection, which is in charge of environmental policy, local governments, and other organizations in China. The seminar aimed to further deepen and expand exchanges between Kyushu and China.

-‚ÄúThe Environmental Policies of Kitakyushu City‚Äù: Mr. Kazunori Hisanabe, Director-General, Environment Bureau, Kitakyushu City
The speaker reported on such topics as building necessary mechanisms to reduce costs and efforts to gain the understanding of companies and residents in order to realize an environmental-protection and recycling society. He also introduced efforts toward the realization of a low-carbon society, including a pioneering example of building a model low-carbon city.

-‚ÄúChina‚Äôs Environmental Protection Regulations and Their Operation‚Äù: Ms. Wang Kaiyu, Director, Chinese Ministry of Environmental Protection
Since the establishment and thorough enforcement of laws and regulations by the government are essential for nurturing and developing environmental industries, which are ‚Äúregulated‚Äù industries, a representative of the Chinese central government reported on environmental regulations in China that exert a major impact on companies doing business in China, the present state of compliance and transparency, and future policies.

-‚ÄúDalian City‚Äôs Efforts in the Environmental Field‚Äù: Dr. Dong Wei, Director, Dalian Environmental Protection Bureau
An official of the Dalian City People‚Äôs Government reported on the latest efforts being made in Dalian, a leading environment-oriented city in China, relating to such issues as the operation of state-level legislation, the mechanism for formulating environmental projects, and priority areas in environmental policy, as well as the possibilities for Japanese companies to enter the environmental business in Dalian.

-‚ÄúK-RIP‚Äôs Aim to Develop Environmental Business in Asia‚Äù: Mr. Yutaka Aso, Chairman, Kyushu Recycle and Environmental Industry Plaza (K-RIP)
From Kyushu, the chairperson of K-RIP reported on the results of exchanges between K-RIP and Dalian and also suggested the necessary conditions for business-based environmental cooperation.

The seminar contributed toward deepening mutual awareness of Kyushu‚Äôs experience in the environmental field and the efforts of Chinese authorities and discussed the potential and needs of environmental industry exchange. Although it was regional-level exchange between Kyushu and Dalian, the seminar attracted much interest as a most advanced effort by Japan and China, and the 300-seat venue was packed. 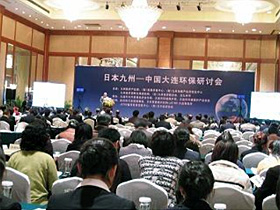 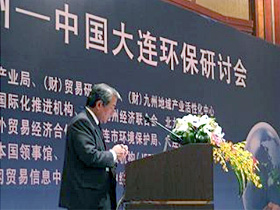