This project involves inviting young corporate executives from Belgium and Luxembourg to Japan and supporting their generation of business with Japanese companies with the objective of expanding investment and trade between Japan and those countries.
The project, which has been held biennially since 1998, took place for the seventh time in 2010. This time the mission members were selected from six companies in Belgium. During their one-week stay in Japan, they received lectures on the current economic situation in Japan, Japanese business customs, and other topics and individually visited companies.
The project gave rise to hopes of expanded business in the future, with the companies of the participating members looking forward to receiving samples and orders from Japanese companies, holding product consultations, and so forth. 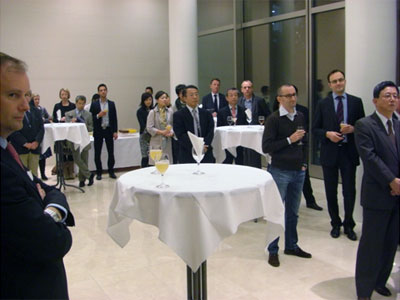 Closing party at the Belgian Embassy in Tokyo