Support for the Promotion of Belgian-Luxembourg Trade to Japan (September)

Together with the Embassy of Belgium, the Embassy of Luxembourg, and the Belgian-Luxembourg Chamber of Commerce in Japan, IIST supported for the exhibition booths of 22 companies handling Belgian and Luxembourg products, the government tourist departments of the two countries, and others at ‚ÄúExpo Y150‚Äù celebrating the 150th anniversary of the opening of the Port of Yokohama.
The event, which was named the Belgian-Luxembourg Product Fair, was opened by Belgian Ambassador Johan Maricou and Luxembourg Ambassador Paul Steinmetz on September 7, 2009. It was introduced in a press release to the media, related articles in such newspapers as the Japan Times and Daily Yomiuri, and also on FM Salus (a community FM radio station in Aoba-ku, Yokohama). This publicity was successful, and many people visited the booths during the exhibition lasting until September 13. As a result, sales and the PR effect exceeded initial expectations, and the aim of the project to support the sales promotion of Belgian and Luxembourg products was amply achieved.

Tape cutting by the ambassadors of Belgium and Luxembourg 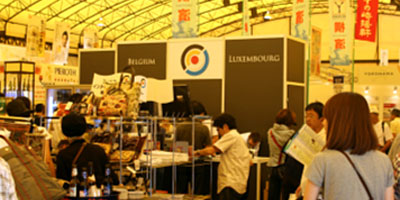