Program participants visited the cities of Delhi, Bangalore, Chennai, and Coimbatore in India where economic growth has been particularly pronounced. There, they met and exchanged ideas with local government officials and representatives from the economy and industry, and from environmental organizations. They also visited a Panasonic plant in Delhi, Toyota Kirloskar Motor, Syngene International Ltd, Biocon, and Infosys in Bangalore, and in Coimbatore toured the Jatropha Farming Project, which is garnering attention for its biofuel.

In recent years, the prominence of India has increased in discussions on growth in Asia. From the standpoint of looking ahead and investigating future development in Asia, it is extremely important to conduct a survey research on India, a country with a booming economy and a population of 1 billion, the largest after China with a population of 1.3 billion. In addition, as India forms a large consumer market in the wake of its growing population and developing economy, it is becoming a complex nation facing risks that include problems with environment, resources/food supply, and water. This program was implemented with the purpose of taking a look at India to build a more significant economic relationship with the country by carrying out a survey based on dynamic trends, actual conditions, and problematic areas, and to search for potentials and problems in future growth in Asia by gathering data and sorting out issues. The main survey content was as follows:

(3) Japanâ€™s reactions and dilemmas; possibility of partnerships with Japan (particularly the Kansai region).

Since the survey was conducted with the aim of understanding both the Indian economy and environment, in addition to visits with the Indian Ministry of Commerce (a meeting with Vice Minister/Secretary Shankar), the Confederation of Indian Industry (CII), and the National Productivity Council, project members also held discussions with organizations that conduct activities focusing on the environment, such as The Energy and Resources Institute (TERI) and a professor from the Centre for Environmental Studies, Anna University. These meetings highlighted that even in this global recession the Indian economy has sustained relatively little damage compared to other Asian countries, and while there are signs of continued strong economic growth, not only do infrastructure problems in various areas remain (particularly inadequate land routes, transportation in Delhi), but worsening environmental issues that accompany economic growth also exist (air pollution, water pollution, low level of environmental awareness among Indian people).

In addition, in both Delhi and Chennai, the mission members received information about the economic environment and relationship with Japan in north and south India from the Japanese embassy in India, the consul general in Chennai, representatives from JETRO and JICA, and Japanese persons engaged in private enterprises in India.

Along with the specialists dispatched for this program, several executives from the Kansai business community considering developing business in India also joined the mission, increasing the possibility of developing business relations between India and Japan in the future. 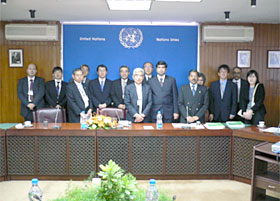 Visiting the Asian and Pacific Centre for Transfer of Technology (APCTT) in Delhi. 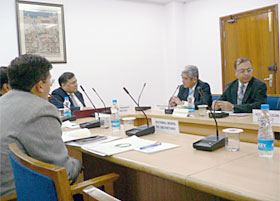 Meeting with Vice Minister/Secretary Shankar at the Indian Ministry of Commerce (Delhi). 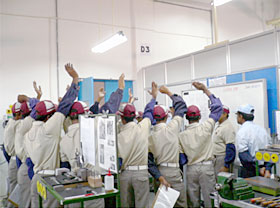 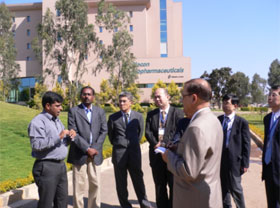 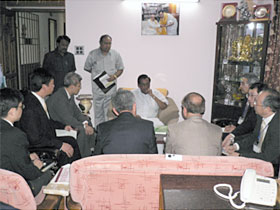 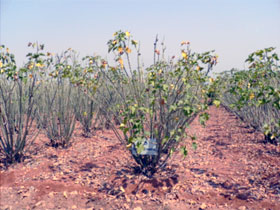