The purpose of next-generation energy parks is to promote understanding of next-generation energies that achieve harmony with the global environment by offering tours of energy equipment such as solar power and hands-on learning facilities. As of 2008, 13 next-generation energy parks have been approved.
With the aim of promoting JapanÔÇÖs new energy initiatives to foreign countries, this program invited ambassadors from the Middle East to visit Hidaka Port New Energy Park located in Gobo City, Wakayama Prefecture. It is said to be one of the parks with the most advanced equipment. The ambassadors toured the site and met with local government personnel and persons from energy companies.

Numerous local news media, such as Asahi Shimbun, Yomiuri Shimbun, Sankei Shimbun, were present during the tour of Hidaka Port New Energy Park. Many articles were written on the tour of the facilities taken by the ambassadors, the commemorative tree planting, and the ambassadorsÔÇÖ interaction with local elementary school students. 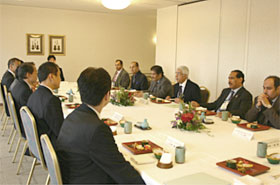 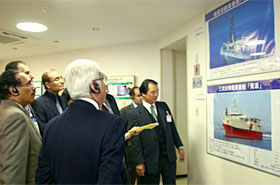 The ambassadors listen to an explanation of the exhibits at EE Park, 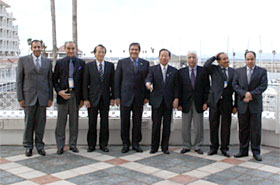 A commemorative picture being taken with Mr. Nikai, Minister of Economy, Trade and Industry