IIST individually invites leading figures active in various fields in Asia, and through activities such as industry tours and opinion exchange meetings with a variety of Japanese VIPs from government, business community, and academia, IIST implements programs that extend invitations to important leaders in Asia in order to promote understanding of Japan and forge of personal connections.
To help with this goal, IIST invited 2 prominent researchers from Kazakhstan and Uzbekistan, an area that has been garnering attention in recent years, who are experts on political and economic conditions in that region, with the aim of securing JapanŌĆÖs natural resources by promoting mutual understanding between Central Asia and building stronger bilateral relations through personal exchange, such as the sharing of opinions with Japanese individuals from various fields. At the same time, the two guests took the podium as overseas lecturers at the IIST-Central Eurasian Study Group International Symposium that was scheduled for October 8th (Wednesday). They spoke to Japanese participants interested in Central Asian issues and introduced a wide range of topics, including politics, economics, and social issues, thus contributing to the encouragement of mutual exchange among researchers from Japan and overseas.

Dr. Satpayev is the representative of an NGO think tank based in Almaty, Kazakhstan that undertakes economic and political analysis, country risk assessment, and related consulting for Central Asia and Caspian Sea states.

Dr. Abduvakhitov is the first Rector of Westminster International University in Tashkent, which opened in 2002 and is affiliated with Westminster University in Britain. His primary area of expertise is politics, but he is well versed in a wide range of topics concerning Central Asia, including economic and social issues. He is particularly knowledgeable about Islamic political activities, international terror, and the impact of Islamic fundamentalism.

The approximately one-week visitation program presented opportunities to explore the possibility of conducting business between Japan and the Central Asian countries as the guests (1) visited and exchanged opinions at METI and MOFA, (2) shared ideas with relevant organizations/researchers at the Japan Association for Trade with Russia and NIS (ROTOBO) and IIST-Central Eurasian Study Group, (3) participated in and lectured at the IIST-Central Eurasian Study Group International Symposium, and (4) held discussions with leading members of the Japan-Kazakhstan/Japan-Uzbekistan Economic Committees and officials from the Japan External Trade Organization (JETRO). Not only did the 2 guests join the IIST-Central Eurasian Study Group International Symposium held on October 8th (Wednesday) as special lecturers and give a 30-min. presentation, but they also participated in discussions. They spoke about the current conditions in their countries, giving participants a rare chance to learn about Kazakhstan and Uzbekistan. In addition, approximately 30 persons joined in the discussions following the symposium that was open to Japanese experts in Central Asia and other relevant individuals. Participants were eager to build favorable relationships and deepen exchange with the two guests.

The greatest outcome of this program was that the guests participated in the symposium as speakers and were able to share information about Central Asia with the many symposium participants (over 100 people attended that day). In Japan, the information available on Central Asia is still limited. The symposium attendees as well as the persons involved in the dialogue with the guests noted that the exchange of ideas was very meaningful.
For example, a professor from Tokyo University of Foreign Studies commented on the seminar-like opinion exchange between the 2 guests and the students saying, ŌĆ£Talks with the students continued longer than I had imagined they would. My students were very pleased with the discussion, and I am grateful for their cooperation. We had just been thinking about enhancing our relationship with Central Asia research and educational organizations. For us, it was an extremely valuable event.ŌĆØ In addition, during the discussion that took place with leading members of Japan-Kazakhstan and Japan-Uzbekistan Economic Committees on the final day of the program, both guests, who are influential individuals in their own nations, were able to communicate what is important to actively promote economic exchange with Japan. Those on the Japanese side expressed hope that without question some kind of development could be carried out in the future.
Furthermore, the guests stated that by exchanging various opinions at this program they were able to understand the scope of interest Japan holds in Central Asia. They said that, in particular, the program increased their understanding of possible future mutual economic programs, which they would enthusiastically evaluate. As relations strengthen between Japan and Central Asia, and with Kazakhstan and Uzbekistan, it is hoped that this program has helped to achieve even more active economic programs. 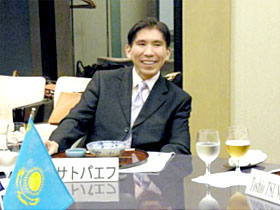 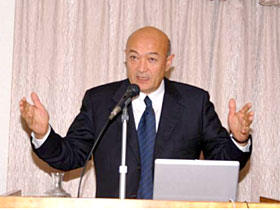 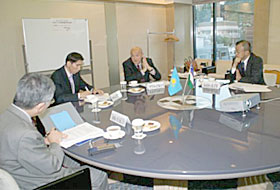 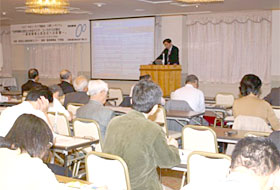 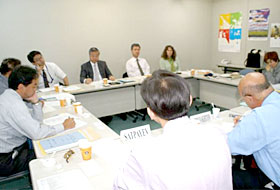 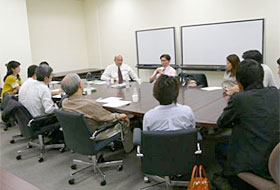 Discussion with professors & students of Russian and East European Studies at Tokyo University of Foreign Studies.