Energy is one of the important issues to consider in achieving a sustainable economic growth that should be both stable and environmentally-friendly. Focusing on the energy field, this program invited influential young officials from the ministries and other government agencies having jurisdiction over energy, and leaders of energy-related organization or state-run enterprises. By enhancing understanding of energy conditions and policies in Japan and promoting exchanges amongst the foreign counterparts in the same field, this program was carried out with the goal of establishing a firm network between the new-generation of Japanese leaders from various fields and their overseas counterparts.

The invitees were made up of three representatives from each of the CLMV countries (a total of 12 persons) in charge of energy-related policy making and enterprises. (For details, please see bottom of page.)

During the one-week program, the invitees observed the state of affairs related to the Japanese economy, industry and energy through visits to the government agencies and private enterprises. The visits included the Ministries of Economy, Trade and Industry (METI) and the Ministry of Foreign Affairs, as well as to private and public enterprises such as Nippon Steel‚Äôs Kimitsu Works, Tokyo Electric Power‚Äôs Yokohama Thermal Power Station, the New Energy and Industrial Technology Development Organization (NEDO), Toyota Motor Corporation‚Äôs Tsutsumi Plant, Mitsubishi Electric‚Äôs Nagoya Works and a municipal facility in Kyoto that converts kitchen waste into fuel. These young leaders also attended lectures on Japanese economy, culture and energy policies, which provided them with a systematic view of the conditions in Japan related to energy. In addition, on the first day of the program, more than 100 people representing business and government who are interested in the CLMV attended the welcome reception. These attendees enjoyed active exchanges with the program participants, indicating that there was a considerable interest in CLMV countries in Japan.
This program accomplished three significant results as outlined below.
The first and foremost was the fact that the briefings by and exchanges with the members of the Agency for Natural Resources and Energy and the New Energy and Industrial Technology Development Organization (NEDO), the CLMV invitees were able to learn about energy conditions in Japan and applicable policies. Many of the invitees were extremely impressed by the clearly-defined objectives set forth by Japanese energy policies, especially energy conservation measures, and the enforcement of meaningful plans to achieve these objectives. They were also struck by the proactive initiatives to improve energy efficiency in Japan that were carried out in the aftermath of the oil crisis in 1970s and 80s and that had resulted in high energy efficiency. Many invitees expressed their hope that, in the future, knowledge and technology from Japan in the energy fields will be transferred to the CLMV countries.
Second, through observation tours of plants and other facilities of corporations, invitees had the first-hand exposure to the actual Japanese economic conditions and energy conservation efforts in the industry. Invitees were exposed to the evidences of the technological prowess that enabled sustained Japanese economic growth through personal observation. While at the same time gaining a deeper understanding with regards to the present Japanese labor shortage with the problems associated with it. The invitees also pointed out that there should be areas in various fields besides the energy where Japan and the CLMV countries can work together. Invitees also indicated the importance of collaboration and cooperation between their own countries, which are blessed with abundant natural resources such as coal and natural gas, and Japan, which is in the vanguard with regards to energy technology and information.
Third, the program provided a good opportunity to initiate an amicable relationship not only among the participants„ÄÄbut also between the participants and representatives of the Japanese government agencies and corporations. This relationship, it is hoped, will further develop among individuals in the energy field, leading to building an extensive human network. In addition, the visits to cultural and historical facilities enabled many invitees develop their affinity towards Japanese traditions and culture, making them feel stronger bonds with Japan in the process.
The organizing members of IIST were pleased with the results noted above. The program such as this will play an important role in efforts to strengthening and promoting collaborative relationships between and among the CLMV countries and Japan. 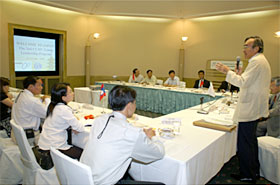 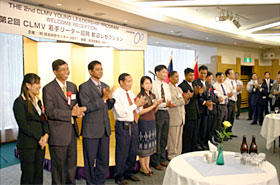 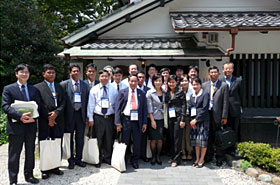 After the luncheon meeting hosted by Vice Minister of METI 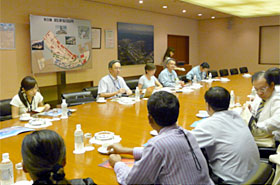 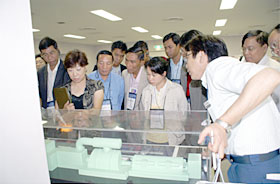 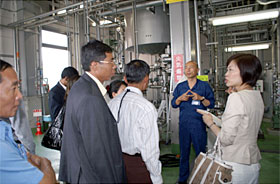 At the Kyoto municipal facility for converting kitchen waste into fuel