In recent years, eco-tours are attracting attention in Japan as a means of regional economic development through good use of existing natural resources and environment, building on increasing consciousness to protect the environment. However, some issues have surfaced, such as the roles and relations between those engaged in tourism businesses and local residents, inadequate qualifications and standards due partly to the lack of certification system or systematic training of the persons in the eco-tourism.
Australia, which is regarded to be a leader in ecotourism, provides advices to other countries or municipalities promoting ecotourism programs that make use of the abundant natural heritage in their respective locations.
The aim of this program was to learn how to successfully implement an ecotourism program from the experience of Australia and to develop collaborative relations between the eco-tourism industries in Japan and Australia. By so doing, it was envisioned that some of the above-mentioned issues would be addressed to foster ecotourism in Japan, and to contribute to revitalization of regional economy.

At the beginning of the program, Ms. Kobayashi made a briefing on the reasons for development of ecotourism in Australia which included its abundant natural resources, sensitivity to cultural diversity (such as aborigines), partnerships with research institutes, government support system for ecotourism, and high level of nation-wide environmental awareness, ecotourism authorized programs in Australia and their merits. She also touched on the differences between ecotourism in Japan and Australia. At EA, a staff member answered questions from individual participants, such as barrier-free systems in ecotours and their approach to customer satisfaction. Additionally, at TQ, officials from the Queensland government provided detailed explanations concerning the ecotourism promotion program and ecotourism marketing in Queensland.

After touring the ecotourism sites by visiting Springbrook and Lamington National Parks, the group received information about the facility and an explanation of its operation from the marketing manager of O'Reilly's Rainforest Guesthouse, which is within Lamington National Park.
This guesthouse, known as a high-end accommodation for ecotours, is surrounded by 20,000 hecter subtropical rainforest, owned and operated by the Oâ€™Reilly family for more than 75 years. A nature explanatory program is provided by guides daily and is designed to ensure that travelers staying for long periods of time can learn about the environment without becoming bored. Its great location-being right next to a rainforest-is also one of its characteristics, and its environmental facilities and operational system made a strong impression on the participants, who felt it was a model they could refer to extensively.

At the Daintree Rainforest Environment Centre, the group received explanations concerning the background of establishment of the center, management methodologies, facilities management, and approaches to learning about the environment from its husband and wife team of directors. This center was established and is operated based on their passion for the rainforest and does not receive public funding. It is an eco-product that can be considered a world leader, and this type of thing is hard to find in Japan. Therefore, the participants listened to their opinions with keen interest as they considered it to be a new environmental business model. Additionally, the facilities, including a 23-meter high canopy tower and boardwalk, were built with consideration to various environmental requirements in order to enable ecotourists to experience the world's oldest rainforest. The participants were able to gather information that would be useful for development of facilities in Japan.

At the evening, the group stayed at the Coconut Beach Rainforest Resort and was able to listen to the local situation in regards to eco-tours by exchanging opinions with their sales staff. The participants were also able to learn about the ideal resort of the future, one that blends with the natural environment. Inadequacy in good accommodations often poses a problem in some regions of Japan where ecotours are conducted. The tour of this resort enabled the participants to recognize that it was necessary to create accommodations that appeal to customers in order to enhance popularity of ecotourism in Japan.

On Green Island, a certified ecotour guide, having passed the ecotour guide certification program of Ecotourism Australia, lead the participants through the natural environment and explained the conditions for guides in Australia. The guide's technique, knowledge of the natural environment, and flexibility to adjust the schedule made a deep impact on the participants. They learned many things that they can refer to when training ecotours guides in Japan in the future.

The participants toured Eubenangee, Johnston River Crocodile Farm, Josephine Falls, and Babinda Boulders at this national park. Within the park, the participants closely studied the operation methodologies of the facilities, which were different from those of Japanese national parks in terms of maintained walking paths, toilet facilities, and barbecues, and signage. The participants were very interested in the fact that the national parks in Australia offer a higher degree of freedom for users and that the protective measures are different from those used in Japan. On the other hand, they also learned that the high level of user morale supports the system and recognized the importance of environmental education in general.
The participants were able to obtain various ideas and innovations for making use of the natural environment in tourism by touring eco-products in Australia. On the other hand, the program also highlighted the problems for ecotourism in Japan, and the participants came to understand that there are many things left to be done, such as improvement of facilities at national parks, methods for making use of nature in tourism, and the preparations needed to receive tourists from overseas.

In particular, because anyone can call themselves an ecotour guide and say that they provide ecotours without the need for certification, as there is no recognized certification system for ecotour guides and eco-products in Japan, establishment of these systems is of primary importance. The participants realized that there is a need to request that the relevant institutions in Japan establish a certification system patterned after the certified eco-tour and eco-tour guides in Australia.

It was highly expected that the participants of this program have learned a great deal in their respective fields which will enable them to bring the level of ecotourism to a higher level in Japan and help rebuild the regional economy. 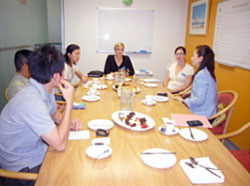 Exchange of opinions with the parties of Ecotourism Australia 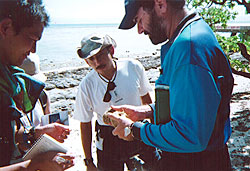 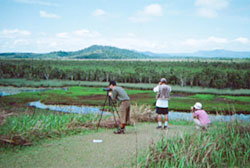