The Rules Division is one of the largest operational divitions in the World Trade Organization (WTO). This division handles over 50% of WTO dispute settlement cases such as trade remedy rules, including anti-dumping, countervailing measures, safegueards, subsidies, state trading and trade in civil aircraft. IIST invited Dr. Jan Woznowski, who has served as Director of the Rules Division since 1992, to Japan in order to offer Japanese government officials and others an opportunity to be briefed by and exchange opinions with the Director on the challenges of conflict resolution at the WTO and the future prospects on dispute settlement cases . The invitation program was also organised with the hope that Dr.Woznowski would deepen understanding of the Japanese economy as well as Japanese society and culture through this sojourn.


Wednesday, Nov. 8
Arrival of the invitee in Japan

Thursday, Nov. 9
Orientation at IIST
Speech at the Research Institute of Economy, Trade and Industry (RIETI)
(BBL Seminar No.0423)

Friday, Nov. 10
Visit to METI
Opinions exchange between executives of the Multilateral Trade System Department of the Trade Policy Bureau

Dr. Jan Woznowski, the Director of the Rules Division is an expert in international trade systems, having gained significant experience within the General Agreement on Tariffs and Trade (GATT) and the WTO. By inviting him to Japan, IIST was able to offer him and Japanese trade experts, including government officials, an opportunity to freely exchange opinions. Through this visit to Japan, IIST contributed in such a way that Dr. Jan Woznowski was able to deepen his understanding of the countryŌĆÖs economic situation and efforts in solving international trade conflicts, while Japanese trade experts were also exposed to the current issues of WTO. It is IIST's hope that this invitational program contributed to the mutual understanding which would lead the future improvement of relations between Japan and the WTO. 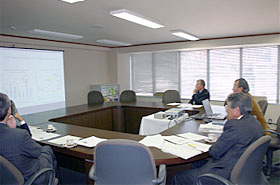