A visit to Vietnam by former Prime Minister Abe in 2006 and a mission sent by the Japan Federation of Economic Organizations marked an acceleration of economic trade between Japan and Vietnam, yet a look at the current state of economic exchange between the Kyushu region and Vietnam shows that only 0.5% (54.3 billion yen) of Kyushu's total trade is with Vietnam, and Kyushu makes up only 4.9% of trade between Japan and Vietnam. Japanese-owned companies in Vietnam (since 1986) number approximately 10, hardly a testament to expanding economic exchange.

Therefore, Kyushu METI and the Kyushu Economic Federation joined together to dispatch an survey mission (30 members) in January 2007 made up of persons from the government and business community to explore ongoing economic exchange between Vietnam and the Kyushu region. The fact that the first group to call on Vietnam for economic promotion following the prime minister's visit came from Kyushu was appreciatively noted in Vietnam, and taking this opportunity, it seems that a network for future economic exchange between Kyushu and Vietnam was enhanced further.

Based on the result of the above-mentioned survey mission, prominent figures were invited to Japan and the Kyushu-Vietnam Economic Exchange Seminar. The Standing Vice Minister and FIA General Director from the Vietnamese MPI were invited to Kyushu to foster public relations with Kyushu, and a seminar was held for Kyushu businesses and persons involved with organizations to promote understanding of Vietnam and business exchange.

Before the seminar, Kyushu Economy International arranged an informal exchange of ideas with local Kyushu companies with interests in Vietnam (20 companies) and a luncheon meeting with the Kyushu business community in an effort to understand the Fukuoka and Kyushu economies. In addition, visits to leading manufacturers of Kyushu, such as the Yawata Steel Plant at Nippon Steel Corporation and the Miyata Factory at Toyota Motor Kyushu, Inc. were in the itinerary.

During the seminar, Mr. Kozo Yamamoto, Member of the House of Representatives (former Senior Vice Minister of METI), spoke of the current situation in Vietnam based on two recent visits to the country and the earnest hopes of building a win-win relationship between Japan and Vietnam. Then, Mr. Truong Van Doan, the Standing Vice Minister of MPI, presented a speech introducing the current state of Vietnam's growing economy. Mr. Truong Van Doan expressed the importance of the economic relationship with Japan, a strategically significant partner to Vietnam, and hopes for trade and investment development of private businesses in Kyushu. Next, Dr. Phan Huu Thang, General Director of FIA, introduced Vietnam's general investment climate, including the investment-related legal framework, industrial complexes, and incentives.

The seminar participants appeared to greatly benefit from the presentations given in Japanese. Mr. Kyoshiro Ichikawa, Senior Advisor to the FIA explained the motivation behind investment and penetration into Vietnam by Japanese companies, and the actual situation (appeal and problems, infrastructure, comparative costs, etc.) in Vietnam from the eyes of Japanese companies. President Koji Takeshima of TOTO VIETNAM CO., LTD., a local Kyushu company that has branched out into Vietnam, spoke about what attracts companies to the country.

-Presentation: "Vietnam: A nation that continues to attract attention as an investment destination"
Kyoshiro Ichikawa, Senior advisor to the Vietnam Ministry of Planning and Investment (MPI) Foreign Investment Agency (FIA) 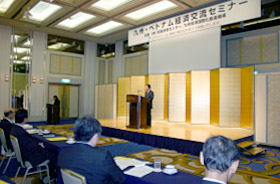 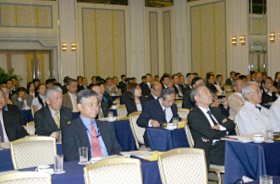 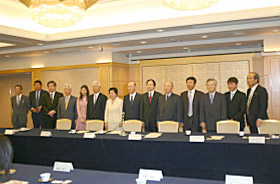 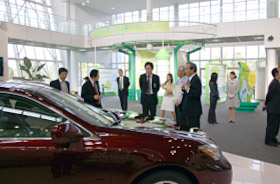