Category: Exchange Program on Specified Themes • Programs for the Promotion of Regional Internationalization and Activation

The Japan-US Investment Seminar has been held every year as a program of the Japan-US Investment Initiative established in June 2001 by Prime Minister Koizumi and President Bush. Its mission is to publicize the characteristics of the region, to encourage investment exchanges between the two countries, and to increase awareness of the importance of foreign direct investment in the regional economy.
The 2007 seminar will be the 6th and will be held in line with the Japan-US Middle West Seminar (in Tokyo). It will be the first time to promote investment in both directions between Japan and the United States.

The governors and vice-governors of the five prefectures of Osaka, Kyoto, Hyogo, Nara and Wakayama presented in the first half of the seminar their respective investment environment and economic support measures designed to attract US companies. In the latter half, the lieutenant governors of the states of Illinois, Iowa, Kansas and Ohio explained the improved investment environment of their respective states and urged Japanese companies to come.
Also introduced were some successful case examples of US companies that had set up in the Kansai District and Japanese companies that had set up in the Midwest of the United States.

A record 230 people participated in the seminar: 162 from Japan and 68 from the US. Among these, there were as many as 13 people from 12 media-related companies including Television Osaka, the Mainichi Newspapers, Asahi Shimbun, Yomiuri Shimbun Osaka Head Office, Nikkei Osaka Branch and Jiji Press. Articles related to this seminar appeared in these newspapers. 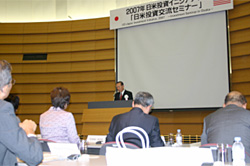 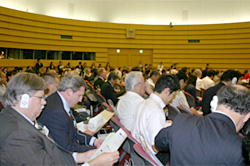