Automotive related industries are expanding their scope of supplies overseas to meet the challenges of increased competition resulting from globalization of economy and with the move toward World's Optimal Purchasing.
The automobile industry in the Chugoku Region has the following four characteristics due to its structure: (1) the scale of manufacturing is small compared with the Chubu and Kanto regions, (2) the ratio of completed cars export is high, (3) there are no large suppliers in the region that develop and manufacture large numbers of parts, such as systems and modules, and (4) there is limited accumulation of automobile electronics technology.
IIST co-organized a strategy seminar to introduce potential business deployment in India, which has high potential for growth and is advanced in the field of software development, so as to plan for a sustained development of the automobile industry of the Chugoku Region.

The reason why India attracts attention as a base for outsourcing is its superior human resources. Abundant and high skilled human resource in India enables the provision of staff in accordance with demand, with a wide variety of services available. The fact that India can meet strict quality standards is also one of the strong points. Furthermore, the very large cost reductions (labor costs) garnered by outsourcing engineering operations to India is another reason for the increase in outsourcing. The superiority of India can be discerned from the fact that at least 150 of the large automobile manufacturers on the Fortune 500 have R&D bases in India. The large population who speak English is also a strong point in global sourcing. Outsourcing is increasing globally, and India has the resources to respond to this increase.

India should not be looked at as ŌĆ£China plus oneŌĆØ. India is the office of the world, while China is the factory of the world. There are various risks in doing business in India, such as tax practices, labor management, and infrastructure. However, it is in the midst of economic development, and we must not miss this business opportunity. The reason why India attracts attention is the fact that 100% investment of foreign capital receives automatic approval in most manufacturing industries and all but a part of financial and retail businesses, tariffs will be completely eliminated by development of an FTA and EPA with Thailand and Singapore, and it has plentiful human resources.

The population distribution of India has a pyramid structure. Therefore, the population of labor will continue to increase, and the number of engineers is growing steadily. The ratio of the population in the high income group is increasing, and products such as mobile phones and automobiles are becoming widespread.
In order to conduct business in India, however, a number of issues need to be considered, including funding, management, labor management (social system), and development of human resources (employee turnover).

(4)Presentation summary of Ms. Sawada
President, Chandela (Importer/distributer of Indian merchandise)
ŌĆ£The India and lifestyles of people that I have seenŌĆØ

India is home to many ancient historic sites, such as Moenjo-daro and Harappa, and most people in the rural areas still live in a manner that is similar to life in those ancient times. On the other hand, the IT and technology fields are becoming increasingly active, and the fact that these two extremes apparently coexist in harmony is surprising. India is fascinating to him as a tourist destination. The number of cars has recently been increasing, and foreign cars, such as Japanese and Korean models, are drawing more attention than domestic models. The increased number of wealthy people is driving up hotel accommodation costs in the urban areas. It is sometimes puzzling that so many different kinds of foods, prayers, and ceremonies exist in India due to the differences in religious beliefs and culture, and India is a country where anything could happen; however, there may be good chance to encounter large business opportunities.

Manufacture and sale of Indian automobiles are rapidly increasing, and the market share of Multi Suzuki for passenger cars is especially devastating. The number of automobiles manufactured in India 3 years from now is expected to be 3 million, which is more than double the number now, and India is expected to become one of the largest manufacturing countries in the world. His company advanced to Indian market in 1996 as a joint venture and manufacture seals for automobiles. People in India understand English, but sometimes there is a gap in mutual understanding; this might be caused by the inexplicit usage of the language by the Japanese. The laws of India are well-grounded; however, there are parts of contracts that are different from what Japanese would expect. Additionally, India is a country where the labor rights are very strong, and employment issues often become a bottleneck when conducting business. India's infrastructure is starting to improve; however, the costs of land and housing are escalating. Accidental explosions, which are not reported in the newspapers, continue to occur, and therefore caution is required.

Approximately 140 people, well over the planned audience, participated in this seminar. The participants came not only from Hiroshima City; but also from outside Hiroshima Prefecture. The participants expressed interest in India, knowing that it is one of BRICS, and that the lecturers were from various fields, with useful topics, even for newcomers to Indian business.

Many participants listened intently, especially to the presentation of the senior vice president of the large IT company from India known for advanced software development,. It was a great opportunity to get the first-hand information concerning software development there. 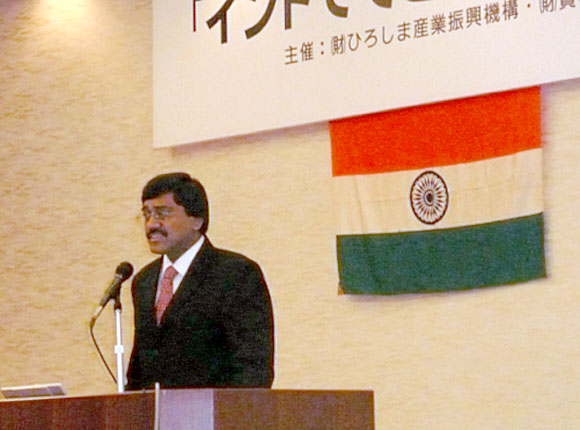 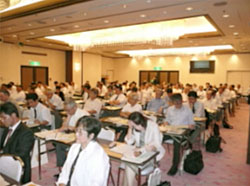 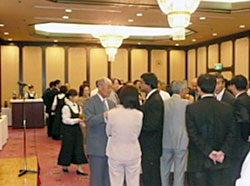