This program invited young leaders from China to Japan with the aim of promoting economic development in China and economic exchange with Japan. The theme for this year is "environment." The objectives are to build a relationship that will serve as a basis for an even closer trusting relationship between China and Japan by introducing Japan's efforts to tackle environmental issues through lectures and site visits, and deepen mutual understanding by exchanging views with persons in Japan from government and relevant fields.

One of the pillars of this program is to learn Japanese environmental initiatives. In Hokkaido, the delegation visited Hokkaido Eco Recycle Systems Co. Ltd. and the Hoku Netsu Corporation Minami-guchi Energy Center Inc in Hokkaido as well as the Used Cooking Oil Biodiesel Plant in Kyoto. Through the visits, participants learned that the theme recycling not only encompasses technology, but also includes the kind of issues an area is facing.

The second pillar of this program was the opportunity to communicate with METI by meeting with senior METI officials and the attendance of METI Northeast Asia Division throughout the program including exchange meetings and lectures on the environment. In addition, there was a mutual exchange of ideas at METI Hokkaido in a meeting with the Director-General and senior officials. In addition to the current circumstances of economics, trade, and industry in Hokkaido, topics such as the policies of METI Hokkaido were explained and discussed

The third pillar of this program was to deepen understanding of Japanese culture. In Tokyo, visits were made to the Imperial Palace and Asakusa. In Hokkaido, the delegation experienced Japan's hot spring culture, and in Kyoto visits to famous historical places including Kinkaku Temple and Arashiyama and a confectionary, to observe Japanese sweets being made, were arranged. Feedback from the participants indicates that these excursions were quite helpful to further understanding of Japanese culture.

Many participants commented that through this program they were able to better understand Japan and learn various topics from Japanese efforts to handle environmental issues. As participants came from different parts of China (Yunnan Province, Guizhou, Beijing, etc.), greater communication took place even among delegate members, and it seems that a new network was built within the Communist Party Youth Cadre.
A thank you letter received from the delegate leader after the group returned to China stated, "We have gained a deeper awareness of Japanese economics, society, and culture through the visit, which cemented our determination and conviction to continue promoting strategic mutual cooperation between China and Japan with an eye toward developing China." 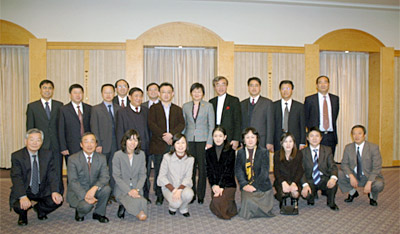 At the program orientation 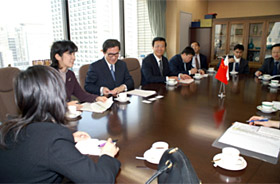 Courtesy call to a senior official of METI 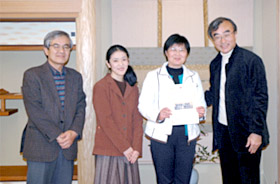 Closing ceremony (a certificate was given to the leader of the visiting delegation from a representative of the co-sponsors, METI, IIST, and the Japan-China Economic Association)