Demonstration Driving Experiments towards Development of a Land Route in the Mekong Region (FY2007) [December 17-23, 2007]

The opening of the Second Mekong International Bridge in December 2006 has increased Japan-owned business interest in ground transportation between Thailand and Vietnam, and for ASEAN and the 3 countries involved including Laos, local expectations are growing as organizations start looking into revitalization of regional roads and promoting land transport that utilizes the East-West Corridor.

Therefore, the Ministry of Economy, Trade and Industry (METI) and the Ministry of Land, Infrastructure and Transport (MLIT) formed together a project team with the participation of private entities such as shipping enterprises and freight carriers, and from October to December 2007 carried out test runs using vehicles loaded with cargo to assess the practicality and commercial viability of ground transportation routes in the East-West Corridor.

IIST sent along experts in logistics to accompany the test run over the route from Ho Chi Minh to Bangkok and survey the current situation and problems in areas such as logistics-related infrastructure and customs procedures.

This program centered on test runs carried out over land. Sagawa Express Vietnam oversaw the transportation of computer components from Fujitsu Computer Products (FCPV), which participated in the project team mentioned above, between the FCPV plant in Ho Chi Minh to the company's assembly plant in Bangkok.

The investigative team, headed by the expert Prof. Nemoto from Graduate School of Hitotsubashi University, rode along during the test run. After viewing the cargo being packed and loaded at FCPV, the team accompanied the road transport from Da Nang to Savannakhet and observed the customs procedure at the border and container transshipment at Savannakhet.

Participants stated that by actually accompanying the driving experiment they were able to precisely discern the current circumstances of logistics infrastructure and customs clearance.
In addition, a meeting was held following completion of the investigation to exchange information and ideas among the participants who accompanied the investigation and those involved with the project team. In particular, the importance of assessing the significance of the East-West Corridor to Laos was emphasized. The results of this investigation will be shared to help realize the future utilization and commercialization of land routes. 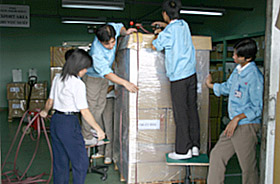 Cargo being packaged for land transportation 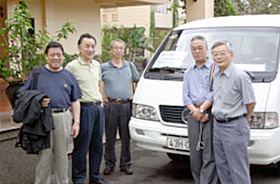 The morning of departure from Da Nang 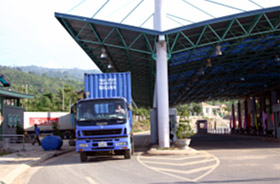 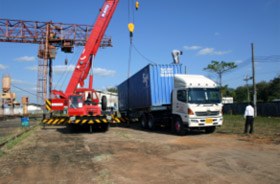