Survey Mission: A Field Study on the Innovation System in India (FY2007)

India's Innovation System has evolved amid a transition in the country's economic system from the traditional planned economy and a focus on public enterprises, to a system based on economic liberations begun in 1991 and foreign capital. Currently, there is a shift from outsourcing of software and pharmaceutical industries in advanced countries, to an Innovation System that creates products and services with high added value based on inventive research and development. In present day as globalization is advancing, Japanese companies, universities, and public research organizations have all recently begun seeking to penetrate and partner with India. A field survey was carried out to assess how this kind of trend toward Japan-India cooperation and the advancement of India's Innovation System will impact one another in the future.

Organized by: Institute for International Studies and Training (IIST)

The last few years Asia has received a lot of attention focusing on innovation, and of late this subject has garnered great interest in terms of comparisons with India. Therefore, this program was instigated to investigate India's Innovation System.

It is said that India's economic growth stems from attracting IT software, but perhaps there are specific and particular factors in the overall Innovation System that has led to investment solely by the software industry. India has drawn worldwide attention because it is linked to places similar to Silicon Valley, but the relationship that these circumstances has to a distortion in industry structure must be considered, and an investigation should look at the actual circumstances of a balanced innovation, or the medium-to-long-term development of India cannot be predicted. With that in mind, field research was conducted that particularly focused on how innovation is progressing not only in the IT software industry, but also in other industries.

Observations were made of the current state of public and private innovation systems in government-related and public research organizations, and areas including R&D activities (Japan, India, Europe, and U.S. related) at universities and education-related institutes such as IIT, and technology transfer system companies (Incubation, Science Park). An interview survey was also conducted through informal talks with relevant persons.

It is impossible to predict the medium-to-long-term development of India unless the actual circumstances of a balanced innovation are examined. Therefore, field research was conducted that specifically focused on how innovation is progressing not only in the IT software industry, but also in other industries. Incubation centers are gaining ground as the foremost sites in India for entrepreneurs and were specially selected for investigation. The characteristics of incubation centers found in various areas in India were observed and the circumstances of instigation-what sort of industry, company, and people were involved-were examined. Each has its own distinctive attributes. Generally, research revealed the existence of various individual systems in India. In contrast to China, which undergoes changes over a short period, survey results indicated that India formulates long-term strategies spanning a period of approximately 10 years. 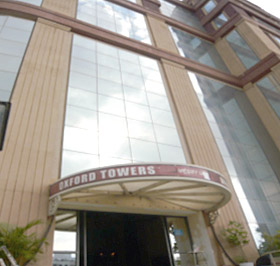 A building occupied by many Silicon Valley IT companies 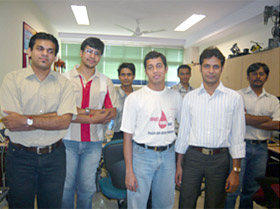 Students from the Indian Institute of Technology(IIT): Not only IT but also robotic development businesses are started. 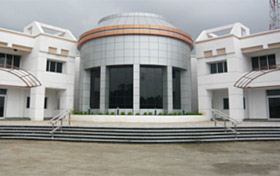