In Japan (as of 2007), there are as yet relatively few who do research on Central Asian countries, although the area has been in a transition period. Clarifying how the Central Asian countries are changing after gaining independence from Russia is critical to promoting stronger future economic ties between Japan and those nations, and it is suggested that further studies be conducted on the political and economic situation of Central Asia.

IIST therefore sent experts to Central Asia to engage in field studies on political and economic situation. One expert was dispatched to Turkmenistan and one to Tajikistan, under the common theme, "A New Direction in Central Asia's Relationship with Russia." Field researches were conducted with the aim of investigating the current situation in Central Asia-a region undergoing constant change, sharing research outcomes with relevant parties, and exchanging information.

<Turkmenistan>ŃĆĆby Prof. Terue Okada
I had planned to conduct an investigation in Turkmenistan focusing on diplomatic relations encompassing energy resources, but because the investigation period coincided with talks involving heads of state from the Commonwealth of Independent States (CIS), security was extremely tight and it was impossible to gather information at the planned destinations. Therefore, the investigation took on a narrower perspective.

From the viewpoint of residential lifestyles, Turkmenistan is an extremely rich country due to oil money and natural gas, and the economy is on the upswing. I questioned whether that wealth is being passed on to the people, but this glimpse of the country showed it has become prosperous. A year ago it appeared that shopping centers were for foreigners or the affluent minority. However, this visit revealed beautifully wrapped goods such as fruits, vegetables, grocery items, and everyday sundries crowding shelves, and stores were filled with many regular shoppers. This attests to the increasing number of people whose lifestyle reflects shopping at upscale supermarkets rather than cheap bazaars. Moreover, I saw many people relaxing at an enjoyable theme park of considerable size similar to Disneyland where citizens can spend their leisure time. Bookstores, too, previously stocked books written by former President Ny?azow, but now bookstores in new commercial establishments are full of Russian books and attractive cards that had not been seen before. From these sights I inferred that the number of options available to citizens have increased and lifestyles have clearly improved compared to one year ago.

If the relationship with Russia were to be described in short, the fact that it is routing natural gas pipelines through Russia means Turkmenistan is largely under Russia's control. With the inauguration of a new president, the relationship between Turkmenistan and Russia will be determined by whether the country takes the initiative toward independence (if Russia's hold is loosened even a little, perhaps negotiations will favorably move ahead). What happens next deserves our attention.

(Original text in Japanese, contributed in 2007)

<Tajikistan> by Prof. Fumiaki Inagaki
Dr. Yutaka Akino, who lost his life in Tajikistan in July 1998 while serving as a political affairs officer for the UNMOT peace-keeping operation, was my adviser when I was a university student, so I have mixed feelings toward Tajikistan. Although I had some reservations about the trip, I felt that the country I visited has become very peaceful.

Presently, the issue of how to export the electric power created through hydro-electric generation has become an important topic in Tajikistan and is being called Tajikistan's resource diplomacy. Aluminum, which uses mass amounts of water and electricity in the refinement, is Tajikistan's principal export industry. Environmentally speaking, aluminum is being considered material indispensable to the auto industry as cars shed weight. In addition, in this era of global warming, hydro-electric generation is appealing as an environmentally friendly, clean energy source that does not emit CO2. Thus, with the world facing environmental problems, the major industries of aluminum and hydro-electric generation deserve mention as attributes of Tajikistan, and I believe they could possibly be industries ideal for economic development.

Although it is currently working with Russian companies on dam construction, contracts are not being carried out smoothly and at the moment construction is stopped. In this way, similar to Turkmenistan, Tajikistan is troubled by Russia, and finding alternatives is becoming imperative.

(Original text in Japanese, contributed in 2007) 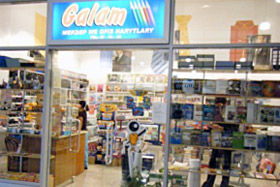 Turkmenistan—Galam, a store filled with Russian books and stationery products 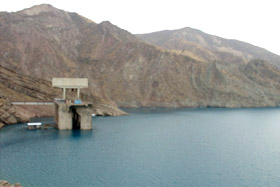