Stable economic growth and the promotion of trade and investment in the CLMV countries (Cambodia, Laos, Myanmar and Vietnam) are important for the integration of the ASEAN economies. In light of this, the Mekong Business Forum was held, aimed at letting parties engaged in trade with the CLMV countries (government organizations and private companies) learn from the experiences of Thailand, an advanced country in this respect, and gain deeper understanding of conducting business with Japan. At this forum, information on trade promotion was offered and opinions were exchanged through a workshop on learning from trade promotion efforts by Thailand and Japan, a seminar held by experts of marketing and design, visits to a furniture factory and the Thailand International Furniture Fair.

Date: March 5-8, 2007
Organized by: Institute for International Studies and Training (IIST)
Co-organized by: The Department of Export Promotion of the Ministry of Commerce, Royal Thailand Government (DEP)
In cooperation with: the Ministry of Economy, Trade and Industry of Japan (METI), Japan External Trade Organization (JETRO)

A total of 15 people, comprising key officers of the respective trade promotion departments of Cambodia, Laos, Myanmar, and Vietnam (one from each country); entrepreneurs from private companies (two from each country who were selected from companies which participated in the MEKONG Exhibition held by JETRO last year); a Thai expert of trade promotion (Department of Export Promotion, Ministry of Commerce, Royal Thai Government (DEP)); a Japanese expert of trade and investment (JETRO); and three experts of marketing in the Japanese market and designing products for Japan

At the workshop on trade promotion, presentations were made on trade promotion efforts in each of the participating nations. The mission also visited a furniture factory producing products for the Japanese market, presented as a successful case, and exchanged opinions with the manager. Participants also visited the Thailand International Furniture Fair and viewed products of internationally competitive companies. At the seminar on the Japanese market, experts gave concrete explanations on the Japanese market, which is said to be unique and to have the strictest customers. Comments included, "The four seasons are clearly distinguished in Japan. So just a slight delay in delivery can be fatal," and "Houses are smaller in Japan, and people prefer smaller furniture and interior goods." Participants said that such information was very helpful.
Participants appreciated the forum, commenting that it offered a good opportunity for those engaged in trade promotion in governmental organizations and entrepreneurs of private companies in the CLMV countries to get together in one place and exchange opinions. People in both the public and private sectors in Cambodia, Laos, and Myanmar, which do not yet have a trade promotion organization, seem to have found the reports on active trade promotion by DEP and VIETRADE instructive. It is expected that the three countries will become more willing to create such organizations. In the meantime, some participants requested Japan to invite people from their countries to exhibitions held in Japan, and offer support for human resources development, as well as information, geared toward helping develop technology. 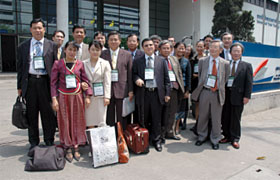 In front of DEP in Thailand 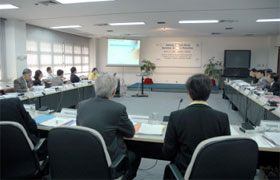 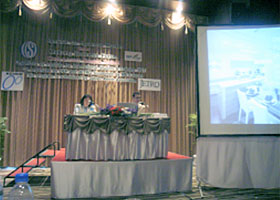 Participating in the Mekong Business Forum