The importance of developing special economic zones (SEZ) as an effective measure for enticing foreign direct investment was reaffirmed in the August 2007 Japan-CLMV Economic Ministers Meeting. As the SEZ seminar plan was welcomed by all CLMV countries, experts in SEZ were dispatched to the symposium in February 2007 at the request of the Lao government.

The SEZ seminar was jointly held with the PR seminar "Economic Research Institute for ASEAN and East Asia," which was planned by JETRO. The ERIA-AMEICC symposium "Development Strategies for Laos: ASEAN-East Asia Economic Integration and SEZ Policies" was held under the sponsorship of 4 entities, including the Lao Ministry of Industry and Commerce.

Prior to the seminar, Mr. Shoichi Kobayashi visited the SEZ sites that are underway, located along Rt. 9 (East-West Economic Corridor) in Savannakhet Province, visiting relevant government agencies with explanation of the importance of enticing foreign capital through SEZ development.

At the symposium, Mr. Kobayashi presented a lecture "Special Economic Zones-Effective Development Policy" and spoke of how developing SEZ is an effective way to attract foreign direct investment, and that the present time offers ideal opportunities for Laos, as areas such as logistics networks are being improved in an effort to integrate the ASEAN region.ŃĆĆThe Lao Minister of Industry and Commerce, an advisor to the Ministry of Planning and Investment, and the Director of the Institute of Developing Economies (IDE-JETRO) also gave keynote lectures at the symposium, and the panel discussion titled, "Economic Development Strategies for Laos through Economic Integration: Foreign direct investment, SEZ, and beyond," included participants such as the National Economy Research Institute of Lao PDR, the Industrial Estate Authority of Thailand (IEAT), and persons related to Japan Bank for International Cooperation (JBIC).

Mr. Kobayashi has 30 years of experience with SEZ development in various countries in Asia, and in September 2006 carried out a field investigation concerning the status of SEZ development in CLMV countries including Laos. As one of the lecturers most suited to speak on this program's theme, he was welcomed in Laos and spoke in person to prominent persons in government, including the Deputy Prime Minister. The Deputy Prime Minister also extended an opening address at the symposium.

PR activities had been fully supported by the Lao Ministry of Industry and Commerce and the National Economy Research Institute of Lao PDR and the symposium was concluded with great success, with over 120 persons participating from government and the private sector. The dispatch of experts helped prompt action, and after the symposium earnest action was taken to establish SEZ in the Vientiane vicinity. Future developments will be watched. 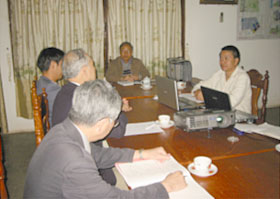 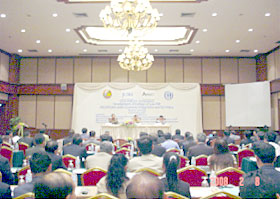 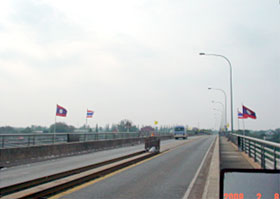