In the Bogor Declaration in 1994, APEC advocated free and open trade and investment in the region. The target year of 2010 (2020 for developing nations) is fast approaching. While the liberalization of trade advanced remarkably, not enough efforts have been made in the investment field. At the APEC Summit and Ministerial Meetings in 2005 (Pusan, Korea) and 2006 (Hanoi), it was strongly recommended to place greater emphasis in capacity-building and sharing of best practices in the investment field.
In response, IIST started this project in 2007. As the first phase, IIST organized the kick-off meeting and the IEG-HRD Coordination Meeting. During these activities, HRD experts exchanged views with investment experts who were participating in the Seminar for Promoting Public-Private Dialogue and investment expertsŌĆÖ group meeting to set the direction for the project.

At the Kick-off Meeting on the first day (June 23), HRD experts planned detailed activities of the project and future directions. It was decided to compile training materials in a form of case studies on the issues that companies actually faced in investing in the APEC region and their responses. On the next day (June 24), a meeting was held between the core members of the IEG and HRD experts to exchange views on these project activities. At the Third Investment ExpertsŌĆÖ Group Meeting (IEG3) on the final day (June 25), IIST representative explained the detailed implementation plan of this project to the IEG members to ask for their cooperation in this project to develop cases.

At the ŌĆ£APEC Seminar for Promoting Public-Private DialogueŌĆØ held on the second day (June 24), presentations covered various cases of public-private dialogue initiatives aimed at the liberalization and facilitation of investment in the APEC region (e.g., Japan-Vietnam Joint Initiative, Japan-Indonesia Public-Private Joint Investment Forum, US-ASEAN Business Council, and AFTA-CER Business Council). It was noted that in promoting investment, it was important for policy makers to listen to the expectations and needs of businesses, and to build a cooperative relationship between the two. The importance of capacity-building for human resources in the investment field was also emphasized.

Through the three-day meetings and seminar, lively discussions took place with participants both developed and developing economies, and HRD and investment experts from various APEC regions. As a result, diverse views of stakeholders were incorporated in the project plan.

In particular, it was a valuable opportunity to exchange opinions with the IEG members who are APEC representatives in investment field, to confirm the importance of HRD to advance investment liberalization in APEC.
The dialogue contributed to building a new network for cooperation. 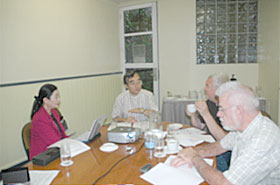 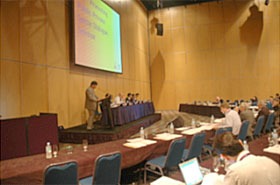 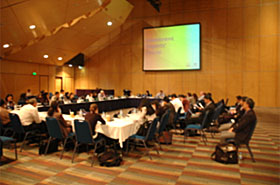 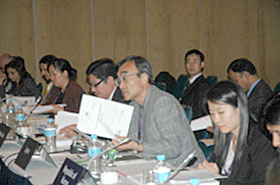