Category: International Economic and Industrial Exchange Program • Programs for the Promotion of Regional Internationalization and Activation

The 7th Hokuriku (Japan)-Korea Economic Exchange Meeting was held in Fukui City concurrently with the Hokuriku Technology Fair, and various programs were implemented to promote substantial economic exchanges between the regions (countries). As part of the event, IIST held lectures for local businesspersons and participants from South Korea to increase their awareness of the importance of Japan-Korea economic exchanges.
In addition to attending the lectures, companies participating from South Korea made presentations, exhibited their products at the Technology Fair, and held business meetings with Japanese companies. Thus a variety of programs were held to facilitate business between the two countries during the Economic Exchange Meeting, which is held regularly.

Professor Yanai examined actual economic exchanges between the Hokuriku region and South Korea in reference to relevant data and specific examples and highlighted the importance for the Hokuriku region of promoting economic exchanges with the country. Based on more than 20 years of experience in making technological improvements to the Korean mold industry, Mr. Ueda explained how engineers were educated and trained in South Korea. He pointed out that Japan was behind South Korea in the establishment of systems to develop engineers and insisted that local companies in the Hokuriku region should actively implement measures to improve the situation. Mr. Bang introduced the global strategy of Samsung and described important issues concerning the company, including the position of technological development in the strategy, and what measures it had implemented concerning such development.

The lectures were held concurrently with various programs at the Technology Fair and those who were attending the programs were not able to attend the lectures. The lecturers and their themes, however, were well-balanced and the lectures had important implications for local businesspersons.

Lecture 2: Lecture on manufacturing in Japan and South Korea for survival in global competition by Katsuhiro Ueda, President of Ogaki Seiko Co., Ltd. 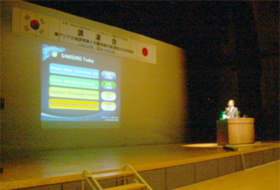 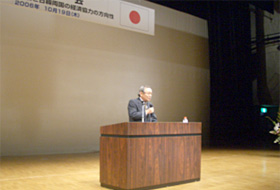 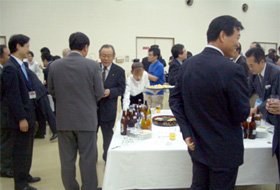