The progress of economic globalization has made it impossible for advanced nations to compete with emergent developing nations in simple cost competition. What advanced nations should do in the future in order to overcome common problems of the world such as the sharp rise in oil prices in recent years, global warming and chronic poverty and to contribute to sustainable development in the world while maintaining their economic power is being questioned.
In light of these, we held this forum taking advantage of the visit to Japan by Mr. Angel Gurria, Secretary-General of OECD (Organisation for Economic Co-operation and Development). At the forum, the Secretary-General and Mr. Toshihiro Nikai, Minister of Economy, Trade and Industry of Japan delivered speeches, while Japanese experts and representatives of industrial circles attended the panel session on the theme of ŌĆ£the Role of Advanced Nations in the Global Economy.ŌĆØ Thus, opinions were exchanged about the roles which should be played by national governments and companies.

In his opening speech, Mr. Nikai, Minister of METI introduced JapanŌĆÖs ŌĆ£New Economic Growth StrategyŌĆØ aiming to achieve sustainable economic development despite the unfavorable trends of a decrease in population. Mr. Angel Gurria, Secretary-General of OECD, argued that it was an obligation of the OECD members to introduce best practice into other countries of the world and offer positive cooperation in addressing the many problems facing the world economy, including the expanding economic disparity, a sharp rise in oil prices, pension problems caused by the aging of society, WTO negotiations and climate change.
Panelists gave the following presentations at the panel session that was held on the theme of ŌĆ£Challenge for New Growth.ŌĆØ
Dr. M. Yoshitomi: ŌĆ£Promotion of Innovative GrowthŌĆØ
Mr. H. Yajima: ŌĆ£Innovations in the Creation of GoodsŌĆØ
Mr. R. Nezu: ŌĆ£Fortifying the Competitiveness of the Service IndustriesŌĆØ
Mr. T. Kitabata: ŌĆ£Outline of Economic Growth StrategyŌĆØ 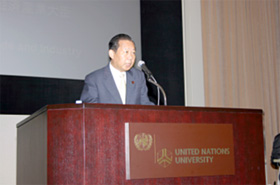 Opening speech by Mr. Nikai, Minister of Economy, Trade and Industry of Japan 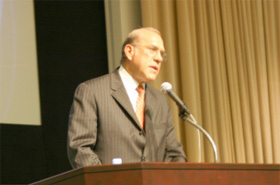 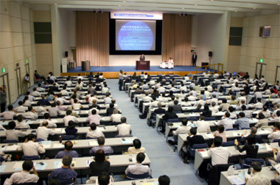 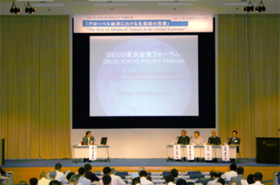