Category: Invitation of Opinion Leaders • FY2006 JKA • Programs for the Promotion of Regional Internationalization and Activation

The European Union (EU) and Japan have no choice but to become a vibrant knowledge economy in order to achieve sustainable global competitiveness. To this end, initiatives for cooperation among industry, government and academia have been taken at both country level and local level in the research and technology fields, which play a crucial role.
IIST therefore organized this forum and invited experts in the fields of nanotechnology and biotechnology from EU countries in order to identify and to overcome issues for fostering cooperation between EU and Japan. Through the introduction of examples and opinion exchange between the invited experts and Japanese counterparts, personal networks were established to help promote international understanding and future information exchange and joint projects.
IIST planned this forum to coincide with the EU-Japan Summit and held it in the Kansai region where the proactive initiatives for the bio-cluster plan have been undertaken.

The opening keynote speeches introduced the industrial cluster policy of Japan and technology platform initiatives in Europe. Subsequently, panelists from both Japan and the EU introduced initiatives on nanotechnology, in particular, nano-electronics, in the first session, and local-level initiatives in the biotechnology field, focusing on the ŌĆ£redŌĆØ biotechnology related to biomedical applications, in the second session.
The forum was attended by audience including approximately 100 from the general public. Many participants commented favorably that the lectures had helped them to recognize the necessity of EU-Japan cooperation in research and development to sustain global competitiveness. It is expected that the achievements of this forum will lead to specific activities to foster cooperation among industry, government, and academia between the EU and Japan. 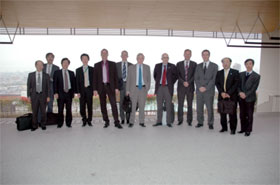 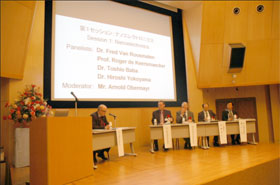 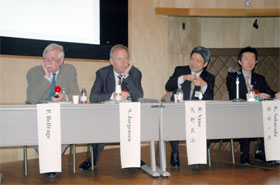