IIST cooperated with the Greater Nagoya Initiative Center (GNIC) in sending a mission to the U.S. led by Mr. Hajime Furuta, Governor of Gifu Prefecture. The project was the first overseas GNIC mission as a consecutive program of GNI Project to Invite Foreign Companies in Japan last year, which IIST also supported with the aim of attracting companies to the Greater Nagoya area.
In San Francisco, the Greater Nagoya Initiative Seminar was held for IT companies, universities, etc. and in Silicon Valley, the mission participated in the Invest Japan World Conference which was jointly organized by the Ministry of Economy, Trade and Industry (METI) of Japan and Japan External Trade Organization (JETRO). The attractiveness of Greater Nagoya was discussed, and information about possible development brought about by industry-university cooperation was offered.
The mission also visited the Greater Washington Initiative (GWI) in Washington D.C. and had an opportunity to talk with executives including the president and exchanged opinions about the possibilities of mutual exchanges.

At the Greater Nagoya Initiative Seminar, the followings were introduced by Mr. Furuta who was the leader of the mission as well as a member of the Operating Committee of GNIC, and by the Director of METI Chubu, etc. Business networking opportunities were also offered after the seminar.
- Attractiveness, environment, etc. of the Greater Nagoya area as a location for establishing business facilities. Particular emphasis was placed on the agglomeration of headquarters functions and bases for research, development and production of environment-friendly products.
- Efforts in the regional economy, including the Messe Nagoya
- Opinion exchanges about the importance of diverse educational systems and environment

Sixty people including local related parties and people from interested companies participated in the Greater Nagoya Initiative (GNI) Seminar in San Francisco, which discussed the importance of cooperation with the Greater Nagoya area through increased investment in the environment and energy sectors of local companies.
At the meeting with the president of the Greater Washington Initiative (GWI) in Washington D.C., it was agreed that both organizations would promote information exchanges aiming to promote mutual understanding. 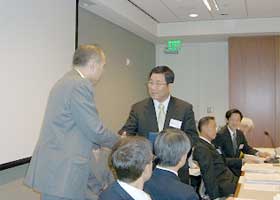 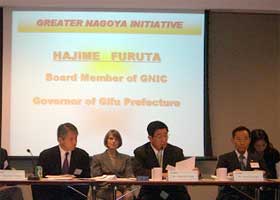