The 35th program was held from September 11 to 16, 2006, with sixteen people participating.

-Presentation on Japanese Politics
Mr. Nobuhiko SUTO, Former Member of the House of Representatives /the Democratic Party of Japan

Opinion leaders including politicians, administrative officials, business leaders and journalists from sixteen countries of the world were invited. They attended lectures on Japanese politics, economy and society/culture, exchanged opinions with an executive officer of the Ministry of Economy, Trade and Industry, visited leading Japanese companies in Tokyo, Nagoya, Kobe and Osaka, and experienced a home-stay with a Japanese family.
The questionnaire results showed that participants greatly appreciated the program. They realized how the Japanese economy has been changing and developing in the process of recovery and obtained a more profound understanding of new issues caused by globalization, through the lectures and visits. They were also able learn other aspects through staying with a Japanese family which the lectures and visits to Japanese companies did not reveal. This is expected to increase their understanding of Japan. 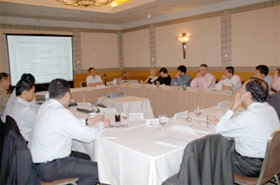 Participants attending the lecture on the Japanese economy 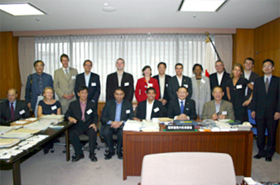 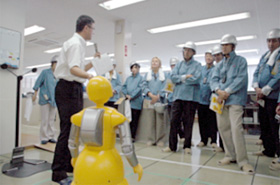 The 35th Leadership Program on Japan Insights and Impressions