The four countries of Cambodia, Laos, Myanmar and Vietnam (hereinafter the CLMV countries) are in the process of recreating themselves after rapid changes in their economic and social structures, including prolonged civil wars and the shift from a planned economy to a market economy. The future economic development of these nations, which are now members of ASEAN, is much anticipated. In light of these circumstances, the Institute for International Studies and Training (IIST) carried out the 1st CLMV Young Leadership Program from September 4 to 9, 2006, to offer information on the Japanese economy, and Japanese industry and society, inviting nine people—including high-ranking government officials—from the CLMV countries. This was in order to support the economic development of the CLMV countries, and to promote mutual understanding and economic exchanges with Japan, through exchanges of opinion with business leaders and high-ranking government officials of Japan, and visits to leading Japanese companies.

Dates: September 4-9, 2006
Organized by: Institute for International Studies and Training (IIST)
Supported by: the Ministry of Economy, Trade and Industry

During the one week-long visit to Japan, the people invited observed the actual economic and industrial conditions of Japan through visits to the Ministry of Economy, Trade and Industry and the Ministry of Foreign Affairs, exchanges of opinion with executive officials of economic organizations including Nippon Keidanren and the Japan Chamber of Commerce and Industry, and visits to Toyota Motor Corporation, Nippon Steel Corporation, a subcontractor company responsible for the embroidering and sewing of apparel (POWER Co., Ltd.), and a company producing contents including game software (TOSE Co., Ltd.). The lectures on the Japanese economy, and Japanese politics and culture were also delivered to learn the current conditions in Japan in a systematic way. As for the welcome reception held on the first day of the program, about 100 people attended—including people from companies interested in the CLMV countries, as well as government-related peopleŌĆĢwho actively promoted friendships and exchanges, indicative of the great interest taken by Japan in the CLMV countries. 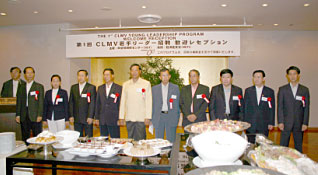 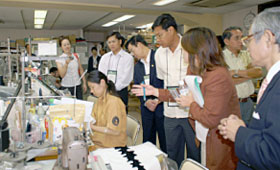 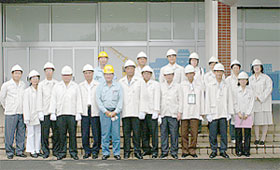