Representing Japan, IIST has been participating in the HRDWG meetings and the CBN general meetings, which are held annually to discuss common capacity building issues in the APEC region and promote joint projects. This year, the meetings were held to examine the agenda for the Human Resource MinistersÔÇÖ Meeting, to be held within the same year and to discuss the work program for 2007, in addition to checking the progress of on-going projects and examining new projects.


The 7th of the Capacity Building Network (CBN) general meeting
Seventeen APEC members dispatched representatives to the meeting held on May 24 and 25, 2006.

At the 28th HRDWG meeting, representatives from APEC member economies made presentations on ÔÇ£HRD and Innovation,ÔÇØ a theme set for the CBN as a common, interdisciplinary theme for all its members, from various viewpoints. Their presentations implied the diversity of APEC.
For the year 2006, Viet Nam proposed a theme of ÔÇ£Towards a Dynamic Community for Sustainable Development and ProsperityÔÇØ and participants agreed to incorporate this theme in the project plan.

At the CBN general meeting, reports were made on the projects now underway and the projects that had been completed. Representing Japan, IIST reported on the following projects.

[Evaluation Reports]
ÒÇîCapacity Building for Recycling-Based Economy (RBE) in APECÒÇì ÒÇîEnhanced Risk Management System in the APEC RegionÒÇì
[Progress Reports]
ÒÇîCapacity Building for the New International Architecture in Trade and InvestmentÒÇì
Symposiums and workshops had been organized to develop human resources who can deal with new economic frameworks, including WTO rules and free trade agreements (FTA), and to further improve their quality.

New Corporate Procurement Strategy on Trade in Goods and Services in APEC Region?Supply Chain Options with CSR Perspective
Implementation plans for the project was discussed, including development of cases on corporate social responsibilities throughout the supply chain including small & medium size businesses.

[Project Proposed]
Japan and Malaysia made the following proposals, which were both strongly supported and approved by participants. IIST will be responsible for the implementation of the Japanese project.

Open Distance Education (ODE) for Greater Equity and Access among Poor and Rural Communities
Malaysia proposed this project to enhance capacity of the people in the remote areas to eliminate disparities, which will be implemented through open distance education

IIST received high evaluation of its contribution to the APEC HRD initiatives, with projects implemented successfully. For the new project proposed by the Institute, 11 members expressed their support and are expected to actively participate in the project. 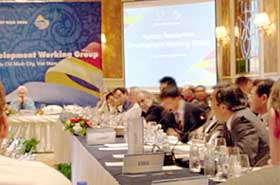 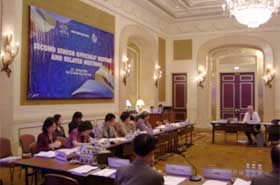 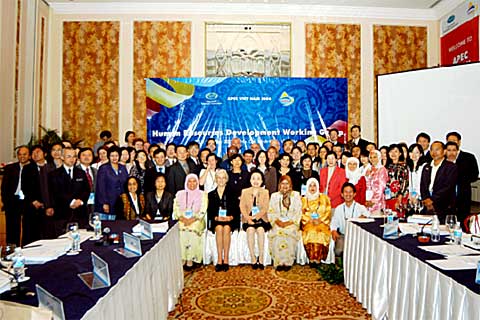 Group photo at the HRDWG meeting