Category: Exchange Program for Foreign Diplomats in Japan • FY2004 JKA • Programs for Understanding Japan • Programs for the Promotion of Regional Internationalization and Activation

The Institute held the Kyushu Industrial Tour from June 1 to 3, 2004, at which diplomats and others from 11 countries and areas, who were engaged in direct foreign investment at foreign embassies and other agencies located within Japan participated and deepened their understanding of the investment environment in Kyushu.

Participants learned about widely-developing industries in Kyushu, including the traditional Japanese steel industry, a game company attracting much attention in the contents industry, and advanced technologies for digital cameras. At a meeting with participants, representatives of local companies in Kyushu negotiated with the participants on specific business deals. Also, the local representativesreceived specific advice on how to attract foreign investment from the participants actually engaged in direct foreign investment. The tour was thus highly evaluated by the representatives in that it contributed to the effective advertisement of local industries and suitable industrial locations in Kyushu. 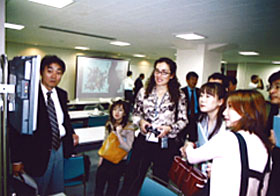 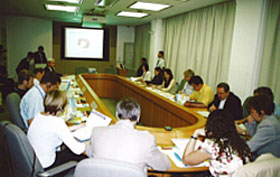 Briefing on the investment environment in Kumamoto 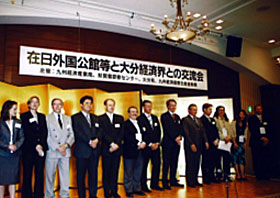