IIST held this industrial tour for people engaged in commerce and economy at Asian embassies in Japan, in order to attract more people to Expo 2005 Aichi Japan to be held from March 25, 2005 and to promote international business exchanges in Nagoya as well as to help participants deepen their understanding of the local economy and investment environment in Nagoya.

At the Nagakute area of the Expo, participants received explanations about the themes and objectives of the event. Also at the Toyota Commemorative Museum of Industry and Technology, they learned the history of Toyota Motors, which was initially manufacturing textile machines. The history seemed to greatly interest participants from Asia, where textile industries are prospering. They earnestly observed the textile machines exhibited in the museum. In addition, they visited Toyota Motor Corporation and NGK Insulators, Ltd. , where they observed the actual manufacturing process of the Prius and of exhaust gas filters.
At the seminars on tourism in the Chubu region and on the Greater Nagoya Initiative, participants could deepen their knowledge about manufacturing in the Chubu region.
The visit to the Chubu region was made just as a typhoon was engulfing the region, but a lot of people attended the reception party, representing the local economic circle. The industrial tour thus made a big impression on the participants. 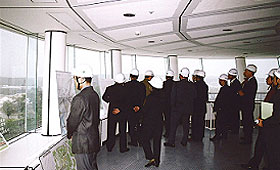 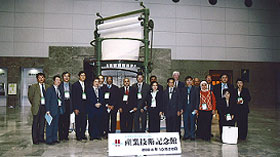